The plant is sturdy, its flowers are beautiful “and yet, and yet,” as Aznavour would say, its fruit repugns: I speak of okra, a vegetable of discord if ever there were one. I feel compelled to try to set the record straight, as this little-known but much maligned vegetable – in North America, Cajun Louisiana excepted – is greatly appreciated just about everywhere else in the world. Why such ill-repute in our climes, I wonder? It’s slimy, some say, …”more slippery than a banana peel!” Perhaps, but the trick lies in its preparation. 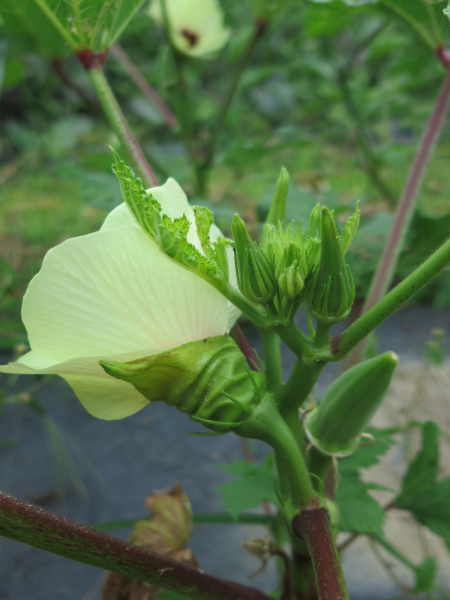 I should start from the very beginning: its scientific name is Abelmoschus Esculentum.  A member of the hibiscus family, its flower is striking, in terms of both its colour and its shape. It is from this flower that the vegetable emerges, seeming to consume itself as it grows. As soon as the vegetable appears, it must be checked frequently. Harvesting it too late (too big) means it is no longer edible; harvesting it too early (too small) means we would require acres and acres of the stuff, and a small army of harvesters as well.

Okra is mucilaginous and works well as a natural thickener in soups and stews. When you cut it into pieces before cooking it, its gelatinous substance dissolves into your dish. If you bite into it raw, on the other hand, you feel a certain viscosity – something I find interesting, okra naysayers notwithstanding.

There is a certain irony to such praise for a vegetable I serve so parsimoniously – like my eggs, some might say – on a first come, first serve basis. But it is impossible to harvest more or faster, as each plant yields no more than a single specimen a day. In closing and to the daring amongst you, note that we will be serving up okra in limited quantities over the next few weeks (see a couple of okra recipes here).