Kale should have a fresh green (or purple) colour with crisp, unwilted leaves. Remove stems on the kale before you start cooking as they can be a little tough. Kale can be substituted for cabbage or spinach and makes a great dish when sautéed with garlic, a little soy and/or a sprinkling of chopped roasted nuts.

A long-standing farm member and author of the food blog Nana Marmelade, Anaïs Berzi serves up a vegetarian version of this classic Portuguese soup made with greens of your liking (collards, kale, Swiss chard, spinach, etc.)…

Last year, Sherri Stark, a partner at our Montreal West drop-off, mentioned a sesame kale salad that was “amazing.” When she sent it, we realized it was actually a Brussels sprouts-sesame-kale salad. She says that some days she doesn’t bother with the Brussels sprouts; we assume there are other days where you could leave out the kale, or use some other leafy green instead…and since we offer Brussels sprouts in the fall, you may find this recipe useful then. It took us a while to post it, but better late than never.

There is a much simpler recipe for kale chips (see below), but after one of our members complained that she found kale chips over-rated, we thought we had to find a jazzed-up version to convince her otherwise. These are delicious. Our only caveat is that oven drying time can vary tremendously, depending on how liberally one coats the kale pieces with the tahini mixture. Ours took more than two hours to reach the desired state of delicate crispiness one would expect. We found ourselves thinking we may use our dehydrator next time we make them instead.

These are five kale-based juice recipes we thought some of you might enjoy.

The first recipe is for a kale- (or spinach-) based protein breakfast shake (or smoothie) from Montreal West partner Rosemary Reilly. She notes that it is «gluten-free, soy-free, lactose-free, sugar-free, and vegan. »  The four others are from Claire’s sister. She sent them to us after we mentioned how “into” juicing many of our customers seem to be. She personally recommends Hail to the Kale and Crazy Sexy Goddess, adding “with a name like that, who can resist?”, but also says they’re all worth a try. We suspect the kale converts among you already have one (or more) kale shake recipes of your own. Feel free to share them with us. For those of you who don’t, try these on for size and let us know which is your favourite.

Hail to the Kale

This recipe comes from Arlington Gardens partner and good friend, Marie Dagenais. Last year (2011), she raved about this traditional Portuguese soup recipe which had reconciled her with kale, but kept forgetting to send it to us. This year (2012), she sent it to us in early May, before the season got underway…and we promptly forgot about it. We apologize, because it really is a delicious soup. We are convinced it will turn even the most recalcitrant of kale eaters into an avid fan. Enjoy! 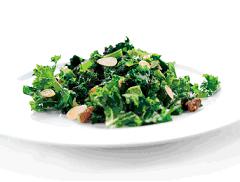