Growing cantaloupes is not (too) hard. Harvesting them just right is (very) hard. We used to grow our own cantaloupes, but for several years now, we have relied on our friends at Ferme Samson et fils, an organic farm in nearby Farnham, to grow the cantaloupes we put in our CSA baskets and sell at market. While we grow 50-60+ different vegetables and small fruits ourselves, Ferme Samson et fils is very focused on a handful of specialty crops for the wholesale organic market, including melons. Their melons are pretty well near perfect.

We generally serve up two types of cantaloupe: 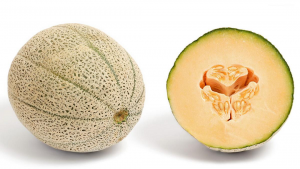 the ‘European’ cantaloupe, C. melo var. cantalupensis, a lightly ribbed melon with a sweet and flavorful flesh and a gray-green skin and the 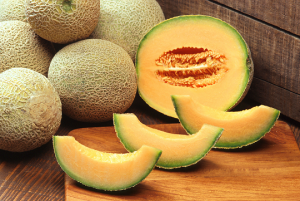 ‘North American’ cantaloupe, C. melo var. reticulatus, a muskmelon with a reticulated, or “net-like” skin and firm, orange, moderately sweet flesh. Both are deliciously refreshing, although the former is usually a bit sweeter than the latter.

For our collective edification, we share this additional tidbit on the etymology of cantaloupe, courtesy of Wikipedia: the name was derived in the 18th century from the French cantaloup, which came from the Italian Cantalupo, a papal county seat near Rome where reportedly the fruit was first introduced from Armenia. Subsequent to its early appearance in Europe, in 1890 the cantaloupe crossed the Atlantic ocean and became a commercial crop in the United States, first, then eventually across North America (ie in Canada and Mexico, too).