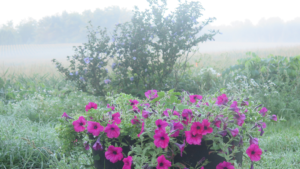 We’ve reached the peak of the season, a time when we begin to anticipate the ebb which will inevitably follow the flow — and quite frankly, this year’s succession of hot, steamy days is bordering on the obscene. This week will be yet another dry one, with little to no precipitation in sight. That said, we won’t exaggerate — already the cooler nights of August are bringing wisps of fog at sundown, and heavy dew at dawn. These contrasts are creating confusion in our plant kingdom as some crops don’t know whether they are coming or going. Indeed, by farmer’s almanach standards, we could well be a mere four weeks away from the first frosts of autumn. But we anticipate too much, we should let nature follow its course, however erratic said course may seem at times. And we’ll cheat a bit, harvesting our onions even as they stand ramrod straight — usually, they begin to topple over as the days shorten — and we’ll soon do the same with our winter squash, despite their showing no signs of slowing down, seemingly blissfully unaware of their imminent demise.

This week’s basket will be bountiful, we hope you appreciate its festive nature. We look forward to seeing you all again.